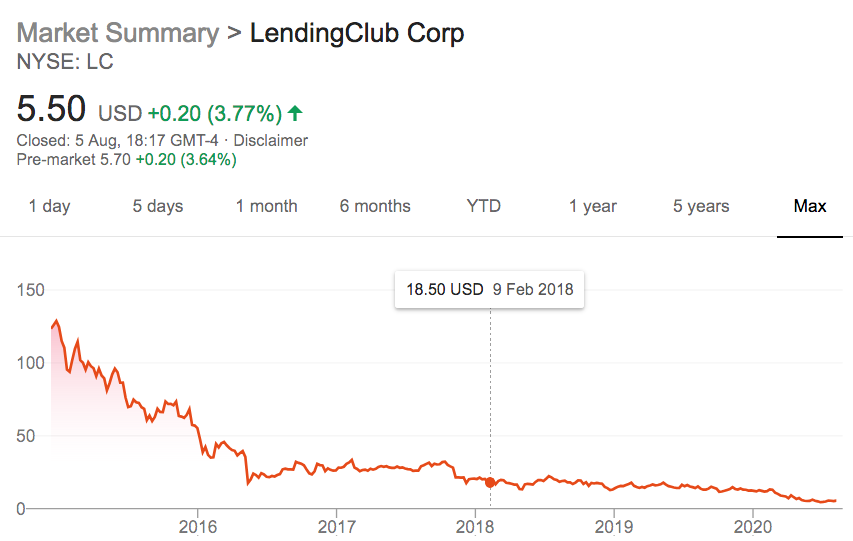 There’s more news from the troubled Lending Club – the direct lender (or marketplace or peer-to-peer [P2P} lender) that has long been seen as a leader in the market in the United States. We take an interest in Lending Club for a number of reasons, not least because its success or otherwise has a direct bearing on the way the fast-evolving direct-lending market in the UK is perceived.

Lending Club’s loan originations of $325.8 million in the second quarter of 2020, down 90 per cent year over-year. AltFi reports:

The marketplace lending giant, like many other lenders around the world has been deeply affected by the spread of the coronavirus and the subsequent lockdowns and uncertain economic environment.

It says that in the period it took “decisive actions” to reduce cash expenses and preserve liquidity but that ultimately lending fell substantially, hitting revenues.

Lending Club made a net loss for the quarter of $78.5m owing to the fall in originations but emphasised this was in line with our expectations. Net Revenue was $43.9m, down 77 per cent year-on-year.

[The] aggressive pricing of Lending Club is just that – aggressive. The bankers behind Lending Club’s IPO have played the media like a knackered trout. They were going to price this asset at nearer $4 billion than $5 billion – still a huge price. But now the financial rabbit has been pulled out of the hat, and here’s Lending Club – fluffy, cute, and possibly just a bit too expensive for its own good.

It would be difficult to argue with that. The horrendous bubble in technology stocks – created by the greed of investment bankers and investors alike – finally burst in March 2000 (not long after the IPO of lastminute.com). The market had its say.

It will have its say with Lending Club – and then, pretty soon I’m guessing, with Funding Circle, and maybe a few other UK-based P2P lenders. If Lending Club proves to be overpriced, it will damage confidence in the price of the stocks, and – unfairly – in the P2P lending sector itself.

It is to be hoped that the market finds Lending Club’s valuation fair from the get-go. But hope rarely triumphs over expectation.

That figure is the result of over £21 million of loans facilitated on the site, as we bring individuals looking for a good return on capital together with carefully vetted small companies seeking funds for growth. Bear in mind that lenders’ capital is at risk. Read warnings on site before committing capital.